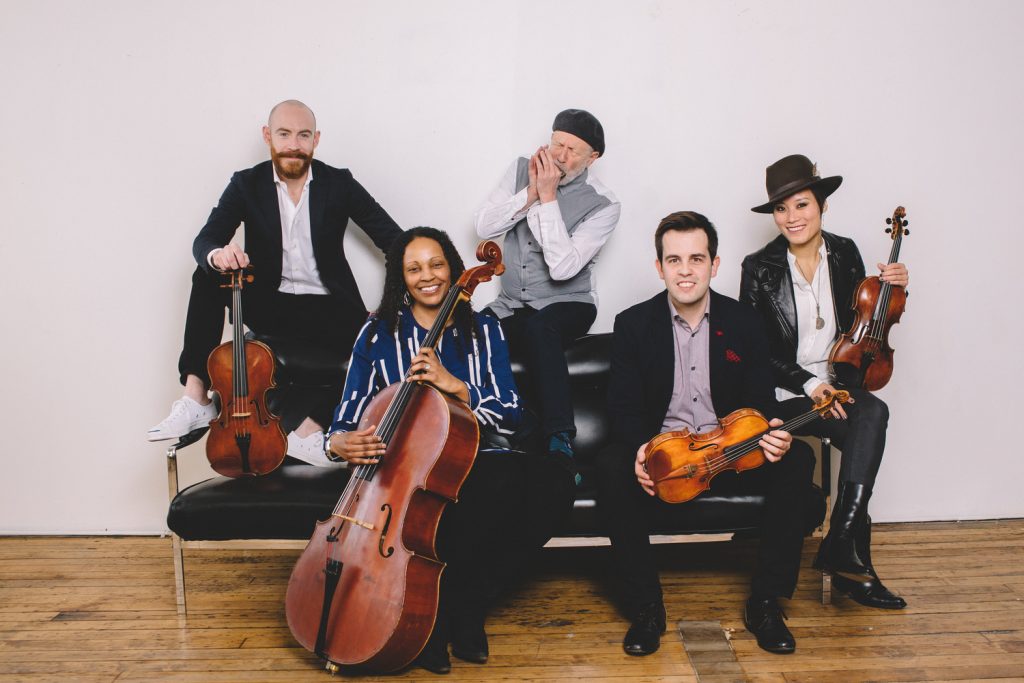 by Steve Warrenfeltz and Scott Tipping

The main event features Corky Siegel and his eclectic Chamber Blues group. As one of the world’s great blues harmonica masters, Corky Siegel returns to Fermilab with a ground-breaking hybrid of classical and blues in a chamber music setting. Corky Siegel is joined by Sam Lay, a renowned drummer in the Blues Hall of Fame and the Jazz Hall of Fame and featured in the History of the Blues, produced by Martin Scorsese.

“Gritty Chicago blues and rarefied classical chamber music might not seem like a match
made in heaven – until you’ve heard Corky Siegel bring the two together… a crowning
achievement.” – Chicago Tribune

Corky Siegel has earned an international reputation as one of the world’s great blues harmonica masters. He is a composer, blues pianist, singer/songwriter. Corky Siegel has played with the blues masters themselves such as Willie Dixon, Little Walter, Muddy Waters, and Howlin’ Wolf – the Chicago blues guys who influenced the likes of the Rolling Stones.

The members of Chamber Blues include Jaime Gorgojo and Chisuan Yang, violins; Dave Moss, viola; and Jocelyn Butler, cello. Chamber Blues will be joined by Sam Lay. With an incredible career that started with the Original Thunderbirds in 1957, Sam Lay has performed with Willie Dixon, Howlin’ Wolf, and Muddy Waters. He was later a member of the Butterfield Blues Band, and was part of Bob Dylan’s band when they performed at the first Newport Folk Festival. He was nominated eight times for the coveted W. C. Handy Award for “Best Instrumentalist” including a recent 2005 nomination.

The special pre-performance talk sponsored by the Fox Valley Music Foundation looks at the convergence of Post-Depresssion Chicago and St. Louis Blues artists that established the “Bluebird sound” in the City of Aurora. The 1937-1938 Leland Bluebird Recording Sessions took place in the Sky Club at the top of Leland Tower on Stolp Avenue in downtown Aurora. Steve Warrenfeltz and Scott Tipping explore the unique circumstances that led to the historic recordings and the significance of those recordings in the history of blues, country, swing and rock and roll music for decades after.

Steve Warrenfeltz, an accountant by trade, a music aficionado and historian by avocation, is the owner of the throwback record store in Batavia, Kiss the Sky and is a member of the Fox Valley Music Foundation Board of Directors. Scott Tipping is a professional musician from Winfield, IL, a blues guitarist and historian of blues music in his own right. Together, Warrenfeltz and Tipping produced and released a tribute CD of 16 Leland Tower songs with a group of Chicago area artists and will be releasing the production in vinyl this fall.