After many years of looking for a permanent home for the Fox Valley Music Foundation, and as fate would have it, the perfect location was presented to us by the City of Aurora as a possibility. A building, formally known as the Woolworth Building, and located at 21 South Broadway in downtown Aurora. Although the building was destined for demolition as part of the City’s formal and long term Master Plan, we convinced the City to give us a crack at turning the building into a live music performance and special event space. The City Council voted to approve our proposal and presented us with a Redevelopment Agreement which we executed in November of 2017.

Perhaps it can be thought of as being appropriate that we would locate in Aurora since the impetus for the formation of the Foundation was founded in the knowledge and love of the Bluebird recordings that took place in downtown Aurora during 1937 and 1938.

The rediscovery of those recordings by a group of local blues enthusiasts in the mid 1990’s lead to the formation of the Fox Valley Blues Society a year or so after that, which begat the Blues on the Fox festival that first took place in 1997.

Since our formation in 2014, we have “helped” with the music part of the Blues on the Fox festival and have worked with Batavia MainStreet and Water Street Studios in the creation of another blues festival called the Blues & Roots on Water Street festival. We have sponsored Singer/Songwriter Workshops and have conducted seminars and lectures at Fox Valley area libraries and Fermilab in Batavia.

The Foundation is currently (2020) in the midst of developing a Music Education program that includes, in part, a Living Music History Video project and the creation of a Fox Valley Music Encyclopedia to be distributed on line, for all to see,  and by way of hard copy formats to educational institutions.

All of this has transpired since our formation in late 2014 while we working out of the back seat and trunk of the Foundation’s Pink Cadillac (it’s a figure of speech).

Today, the Foundation is located at 21 South Broadway in Aurora. Our home is called The Venue. The building is south of Galena and just north of Downer and adjacent to Mundy Park.

Needless to say, we are excited about our future and what tomorrow may bring. Hope that you hop on board that northbound train and join us on our journey.

For more information on upcoming shows and events scheduled for the 200 seat fantastic sounding live music space contained within our home, click here: The Venue. 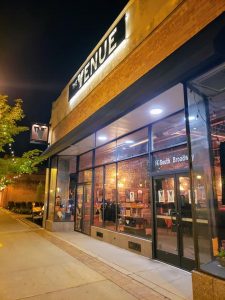 Imagine Summer in the City … 1,000’s of people wandering about checking out the goings on at the Paramount and the Plaza of North Island … 100’s are gathering in RiverEdge Park before an mid-evening McCartney show and afterwards, are heading to downtown Aurora along the River Walk to check out the musicians performing at The Venue’s outdoor stage situated within Mundy Park. Food vendors and street artists abound … music in the air … the sun glistening on the waters of the Fox River … love is in the air and peace permeates the Fox River Valley. Later in the evening, McCartney drops by The Venue to sit in with local fav Noah Gabriel and the two of them treat the adoring audience to a beautiful rendition of Blackbird. It’s a perfect picture!