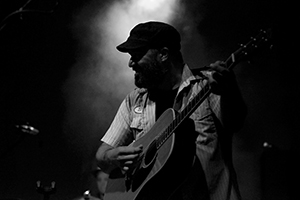 The next in a series of the Summer Songwriter Workshop and Performance Series, featuring Scott Tipping, will take place this Saturday, June 25th, at the Batavia Public Library.

Scott Tipping has been making music in the Chicago area for 20 years and has made a name for himself while playing with such bands as The Mighty Blue Kings, Backyard Tire Fire and Cornmeal.

This show will be an intimate look at some of the material he has been involved with, his own material and a heavy stamping of blues and blues history.  This will all coincide with a new project he has been working on with Steve Warrenfeltz in tribute to Aurora’s historic Leland Tower.

Scott Tipping is part of the one/two punch with Steve Warrenfeltz to present the history of the Leland Tower recordings in Aurora in 1937 and 1938 at the Batavia Public Library New Lydeum Lecture Series last month. Scott was instrumental – literally – in making the tribe CD by the ad hoc band, Leland, that was just released featuring modern (1950’s era) interpretations of 16 of the Leland Tower songs. The vinyl will be released in the fall.

Scott was also front and center to open the 20th anniversary of Blues on the Fox Saturday June 18th with the band Leland, fronting Mae Koen and Mick Ducker and the guys, playing some of the Leland Tower songs to a very enthusiastic crowd. Scott is a student of music and the history of music and should be as informative as he is entertaining.